Maybe you already saw this in the local news, or maybe this is totally news to you, but we are pleased-as-punch to let you know that our friends at CONE Credit Union in Neenah have voted in favor of joining the Simplicity Family.

Here’s the press release we sent out last week, just after the results of the vote were announced:

“Simplicity CU, Marshfield, is pleased to announce that the members of CONE Credit Union, Neenah, have voted to approve a proposed merger, effective July 1st, 2021 between the two credit unions. At a membership meeting held on June 21st, 2021, results of the merger vote were announced to the CONE membership, with 83% of those who voted approving the merger plan.

“First and foremost,” Said Mike Mehlberg, CONE Credit Union President/CEO. “I want to thank the members of CONE Credit Union for their tremendous show of support…. The last several months have been quite a journey, and our work together is really just beginning.”

CONE Credit Union’s current staff and the location at 219 W. Cecil Street, Neenah, WI will remain to serve members in Neenah and the surrounding areas and welcome new members with an expanded field of membership that includes anyone living or working in Brown, Calumet, Outagamie, Fond du Lac, or Winnebago counties.

In his address to the CONE membership at their June 21st meeting, Nick Faber, Simplicity President/CEO, said, “From the very beginning of this merger process, I saw not two different groups, but one team composed of CONE and Simplicity people, all dedicated to the goal of making life better for their members… I’m incredibly pleased to be able to welcome you all, officially, to the Simplicity Family.”

Plans announced to members of both credit unions call for the Neenah office to be refreshed over the summer with the Simplicity CU name and brand and the integration of all member accounts onto one computer system tentatively in November 2021. In addition, an open house is planned for later in 2021.”

Now, if you’ve read this far and you’re a member of the Simplicity Family (AKA: our staff, our members, our partners, our vendors, anyone who knows us, etc… we’re an inclusive bunch), you probably have a few questions so let’s hit the top 3 right now, and you feel free to send any others to marketing@simplicity.coop so we can update this info as we go ahead, ok?

Question 1: Why did we want to merge with CONE Credit Union?

Good one! You could ask almost any member of the Simplicity Team this question and get a different answer because there are SO MANY reasons this merger was a good fit.

There are practical reasons, like welcoming more people into the Simplicity Family means we can grow to help even more people who need us.

Since we don’t have outside investors (like a bank), we rely on awesome members like you to trust us with your hard-earned cash, borrow money, and use things like debit cards to keep us healthy so we can lend money out and invest in the newest, coolest, most secure services for you.

Then there are the also pretty practical, but admittedly more warm and fuzzy reasons. It’s tough for small credit unions like CONE because the products and services we all expect, like mobile banking or IRAs, cost a lot of money to implement and maintain. Not to mention how important it is to pay employees a fair wage and give them the benefits they need to be happy and healthy. Our friends at CONE were working hard to make this all work, but costs keep rising and eventually might have kept them from being able to help their members in the best way they know how. We saw how a partnership like this merger could help the CONE team, get the latest and greatest products and services to their members, and create a solid foundation to help even more people in the Neenah area, and it was all just too good to pass up.

Question 2: Isn’t Neenah a pretty long way away from Marshfield?

Ok, we’re willing to admit that the distance from Marshfield, where our main branch is, to Neenah, where CONE Credit Union calls home, seems pretty far. Technically it’s somewhere between “A little bit of a drive” and “Quite a-ways” (If you’re from the Midwest, you know what we mean).

Counties) meets up with the Western-Most edge of CONE’s Field of Membership (Winnebago and Outagamie Counties) to serve people all over West-Central Wisconsin. Pretty cool, right?

Question 3: Are you going to get so big that you stop caring about people?

Oooh, this one stings a little, but it’s fair for you to ask, so we need to answer it honestly.

When we call ourselves the “Simplicity Family”, it’s not because we think we’re a perfect picture of everyone being in total peace and harmony every second of every day, it’s kind of the opposite.

It would be easy right now to just tell you that everything will be rosy as we go through this merger and build beyond it, but we know it’s going to be work, and sometimes things aren’t going to go as planned. What you can rely on, though, is that we won’t lose our commitment to do the absolute best for you every single day. And if you ever feel like you’re not getting the care you deserve as a loyal and awesome member of the Simplicity Family, we want to know. Sure, it’s not fun to get that feedback, but that’s how we’ll all grow better together. 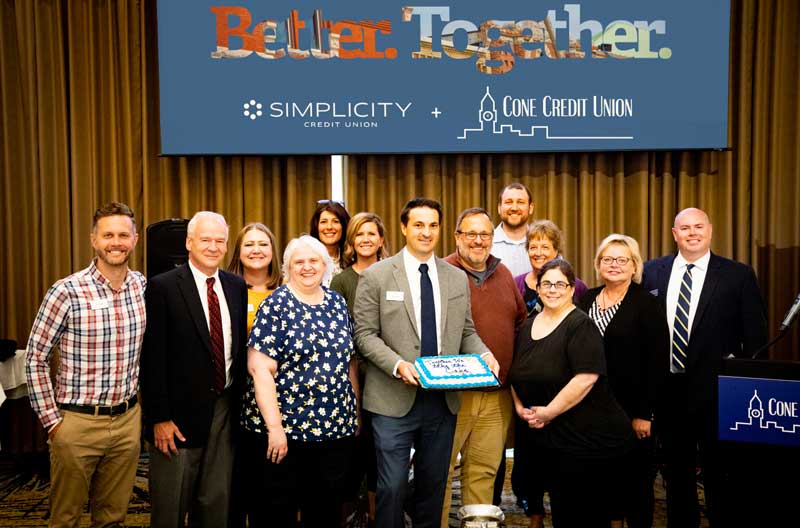